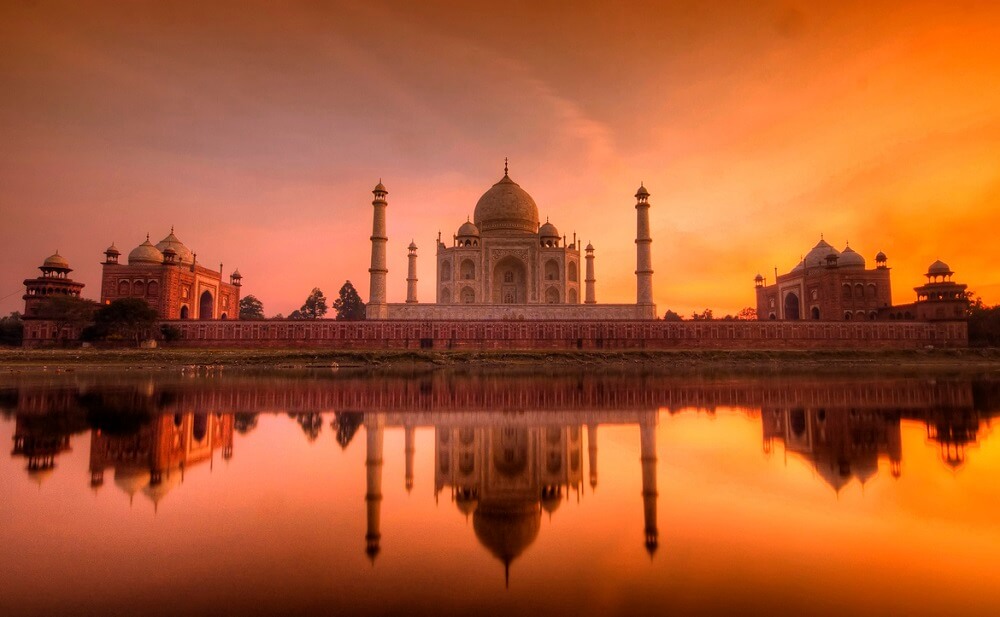 A wedding is the celebration of the beginning of the journey of togetherness. It is the celebration of love where two souls unite in the bond of togetherness. Behind every wedding there is a story while the wedding photography captures the moment of union of the two souls the prewedding photoshoot captures the story behind the union. The prewedding photoshoot not just captures the story of the meetup or the ravishing look of the bride and groom but it also enables the couple to spend quality time together. It enables them to get comfortable with each other and in cases of an arranged marriage, it enables them to get familiar with each other.

Every year thousands of tourists flock to Agra to get a glimpse of the monument of love. The city of love with its enthralling beauty has inspired the couples over the years. Are you also one of those who for the love of Taj wish to have their prewedding shoot in the city? Then you must be in quest of prewedding shoot locations in the city. So here is a list of some of the best shoot places in and around Agra.

Built with rand sandstone the Agra Fort is an ancient historical monument that gives a glimpse of the expert craftsmanship of the Mughals. Declared as a UNESCO world heritage site the fort is home to several picturesque places such as Diwan-e-aam, Diwan-e-Khass, Sheesh Mahal, Nagina Masjid. Give your prewedding photoshoot a twist as you get it shot in Agra Fort. A shoot at the ancient fort would seem no less than a picture out of the Bollywood flicks.

Situated on the banks of the river Yamuna the Mehtab Bagh is one of the last Mughal gardens. Providing the aesthetical backdrop of the Taj Mahal, a shoot at Mehtab Bagh accentuates the beauty of the pictures. The Mehtab bagh also houses the ruins of the black Taj. If your searching for peaceful prewedding shoot places in Agra then Mehtab Bagh is the best choice.

A peaceful wooden park, the Taj nature walk is situated near the beautiful Taj Mahal. Spread over a sprawling area of 70 hectare the Taj Nature walk is a perfect blend of nature and history. Enhance the beauty of your pictures as you get your prewedding shoot done amid nature with the backdrop of the Taj Mahal. The Taj Nature Walk is the perfect destination for getting those romantic candid moments captured.

Imagine a photoshoot on a boat sailing in the sparkling waters of river Yamuna with the backdrop of the monument of love, the Taj Mahal. Sounds dreamy, right! Why not transform this dreamy idea into a reality as you pick the ghats of Yamuna as your prewedding shoot location in Agra. A prewedding shoot on a traditional boat offers a mystical view of the morning sky and amber hues of the setting sun falling over the water.The goodness of nature like the chirping of birds gives your prewedding photoshoot a musical background. Let the breathtaking the beauty of the Yamuna ooze romance in your prewedding photoshoot. The ghats of Yamuna are ideal for getting those candid romantic moments clicked.

Give your prewedding photoshoot a royal touch as you get it shot in Akbar’s tomb. The tomb of the great Mughal emperor lies in an area of 119 acres and is surrounded by a lush green garden around. The architectural wonder is one of the most picturesque locations for those ardent history lovers. If your one of those admirers of Akbar the great then his tomb is the perfect place for your prewedding shoot location.

Fatehpur Sikri is one of the visited world tourist destinations after the Taj Mahal. Declared as a UNESCO world heritage site, Fatehpur Sikri situated 60 km away from Agra. The grand fort is home to numerous pre-wedding shoot destinations such as Panch Mahal, Tomb of Salim Chisti, Buland Darwaza, Jama Mosque and green Mughal era gardens. If your looking for one destination that offers several picturesque spots for the shoot then Fatehpur Sikri is your place.

Itmad-ud-Daulah's Tomb is a Mughal mausoleum that is often termed as baby Taj. The mausoleum is the tomb of Mizra Ghiyas Beg who was apparently was the grandfather of Mumtaz Mahal. The tomb resembles in appearance to that of Jahangir’s tomb built in Lahore. The tomb was built by his daughter Nur Jahan.Delicate in appearance this tomb features finely carved marble jhalis. The tomb built on the banks of Yamuna is the first monument to be built from only marble. The tomb serves as an ideal prewedding shoot location in Agra for those couples who are lovers for mughlian artwork.

Made from red sandstone the Jama Masjid is a simple mosque built y Jahanara.An imposing piece of mughalian architecture the Jama Masjid is one of the largest mosques in the country. It is the main mosque that is still flocked by people. Give your pictures a religious turn as you get your prewedding photoshoot done here.

This relatively simple mosque built almost entirely in red sandstone was built by Jahanara, the daughter of Shah Jahan. Seen in itself, this is still an imposing piece of architecture and one of the largest mosques in the country. This is still used as the main mosque in the city.

The opulent Sikandra fort is a 17th-century Mughal mausoleum that is also known as Akbar's tomb. The Mughal emperor got his tomb made while he was alive as his resting place. The beautiful architecture is made from sandstone and white marble. The Sikandra fort gives a glimpse of the Mughals, Rajputana and gothic style of architecture. The calligraphy, floral patterns, and geometric designs are what adds to the beauty of the Sikandra Fort. If your looking for a prewedding shoot location in Agra that offers an amalgamation of nature and history then you can consider selecting Sikandra Fort.

An octagonal tower the Musamman Burj is situated close to Diwan –E-Khas the private hall of Shah Jahan. The tower is made from white stone lattice and gives a spectacular view of the Taj Mahal, Overlooking the Yamuna and the Taj mahal the Musamman Burj is a perfect place for getting beautiful pictures of prewedding clicked.

For those couple with a love for wildlife and nature the Wildlife SOS serves as the ideal prewedding shoot location in Agra. Established in 1995 the Wildlife SOS was built as an initiative by a group of individuals for the protection of the wildlife. To conserve wildlife and provide them a natural habitat, WildlifeSOS was founded. A photoshoot her would not just spruce up your romance but also would bring you closer to nature.

A tomb and funeral monument, the Chini Ka Rauza was dedicated to the memory of the scholar and prime minister of the court Allama Afzal Khan Mullah. The monument is also known as China Town. Situated on the eastern banks of the river Yamuna, hidden by an alcove of trees the tomb is a happy discovery place for the couples. This hidden tomb serves as a perfect prewedding shoot location in Agra.

Love nature? Then why not get your prewedding shoot done at Rambagh garden. Rambagh garden is one of the oldest and well preserved Mughal gardens. The garden comprises of 4 sections which are separated by waterways and paths. Surrounded by huge walls and pavilion towers the garden provides a breathtaking view of sunrise and sunset.

So these are some of the best places that are ideal prewedding shoot location in Agra. Which one is your picking? Share with us about your views and opinions in the comments below. 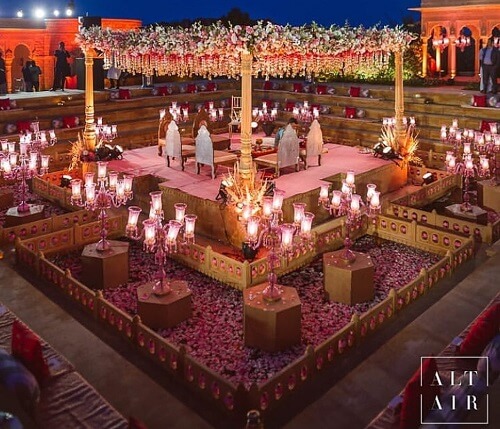 Top Destination Wedding Trends Of 2021 That You Must Wa...

The trend of the destination wedding came like rage and is still quite popular ... 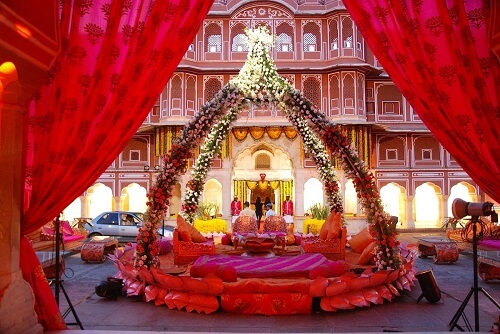 All the couples feel excited when they plan the things for their wedding but as... 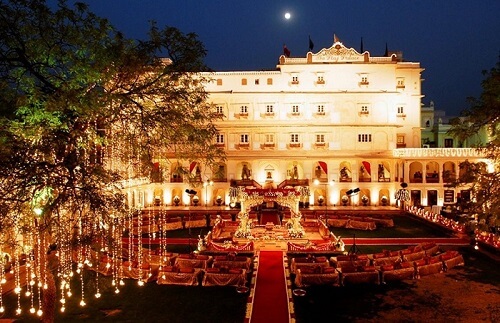 Top 10 Luxury Hotels In Jaipur For A Whimsical Wedding ...

“Once in the middle of ordinary of an ordinary life love gave us a fair...