Gangaur Festival: Why It is Celebrated & Its Historical Significance 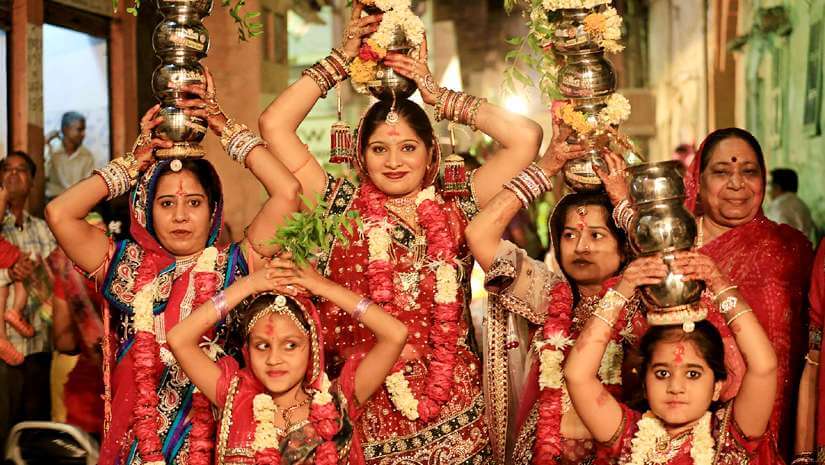 What makes the Rajasthan a truly enchanting place is its inspiring history, valorous and magnanimous kings, rich heritage, artistic culture, and vivacious festivals. Every grain of Rajasthan’s sand has a tail to tell and an enigma which is to be unveiled.

The Rajasthan is massively popular for its colourful and vibrant festivals. However, there is one festival of Rajasthan which is not only utterly unique but also carries a profound historical significance and i.e Gangaur festival.

Gangaur festival origin in deep-rooted in Rajasthan and is one of the most fabled festivals of the land of Maharajas. Apart from the Rajasthan, Gangaur festival is also celebrated in other states like Gujarat, West Bengal, Telangana, and Madhya Pradesh.  This amazing festival is celebrated by the womenfolk of Rajasthan with great fervor and devotion.

In this post, we are going to state about Gangaur festival, why it is celebrated, its historical significance, tales behind Gangaur festival, and various other intriguing facts about the festival. Let’s get started.

Why & When Gangaur Festival is Celebrated?

Though there is not much information on the origin of Gangaur festival but as per the legends, the word ‘Gangaur’ insinuates Lord Shiva and The Goddess Parvati. It is well known that Goddess Parvati did a bone-crunching and soul-crushing Sadhana to marry the Lord Shiva. Lord Shiva got impressed by the prayers of the Parvati and married her.

Later, Lord Vishnu (the preserver) went to the Goddess Parvati parental place to give her blessings for a long-lasting married life. It is said that Lord Vishnu stayed at her parents’ place for 18 days and conducted a grand farewell for Lord Shiva & Lord Parvati who came down to earth after the wedding.

When it comes to the time for celebrating the Gangaur festival, it starts right after the Holi festival and continues for 18 days. In 2019, the celebration commences from  21st March 2019 to 8th April 2019.

The festival of Gangaur is enthusiastically celebrated all over the Rajasthan state. But the grandest celebration of this festival happens in Jaipur. In addition to that, you can also immerse yourself in Gangaur festival vibes by visiting the destinations like Udaipur, Jodhpur, Bikaner, Jaisalmer and other exquisite Rajasthani destinations.

To celebrate the festival, women of Rajasthan wear swoon-worthy traditional dresses, jewelry, and pray to Lord Shiva & Goddess Parvati for 18 days, every morning and evening. One of the most significant elements of the Gangaur ritual is wheat grass. It is sown in a decked out water pot or wicker basket for 18 days. Married women fast for 18 days for the husband’s long life and family happiness. Unmarried girls can also perform the rituals of festivals to pray the lord to tie their wedding knot with the coveted man.

On the 17th day of Gangaur festival, the parental side of the married woman sends sweets, gifts, clothes, jewelry and various other stuff to her house. On the 18th day, a huge and decked out statue of the Goddess Parvati is taken throughout the city. Both men and womenfolks follow the precession along with the bands. Women carry water pots on their heads to the river bank and immerse pots in the river after breaking them near the river bank.

Among all the districts of Rajasthan, Gangaur festival celebrations at Jaipur city is the biggest and the most fabled one. People buy the local sweet dish named ‘Ghewar’ and distribute it to their closed ones. Here, the procession of Goddess Gauri or Parvati begins from City Palace which passes through Tripolia Bazar, Choti Chaupar, Gangauri Bazaar, and the effigy is finally marinated into Talkatora. A huge chunk of people from other states and some from other countries visit Jaipur to be the part of this auspicious festival.

After Jaipur city, Udaipur boasts the biggest celebration of Gangaur festival. One intriguing fact which only the local people know is there is a Ghat in Udaipur which is named after Gangaur festival and is also a hub for the celebration of multiple festivals. In Udaipur city, the procession of Goddess Gauri also commences from city palace and then passes through key areas of the city. The effigies of the Gan and Gauri are marinated in Lake Pichola.

During performing the Gangaur festival rituals, womenfolk sing numerous traditional songs which are solely dedicated to this festival and carries deep meaning.  We have compiled some of the best folk songs which are dedicated to Gangaur festival. These songs not only render tranquility but also give you numerous reasons to relish the festival to the fullest. Here are the songs.